Even if you are not familiar with the ins and outs of the media franchise known as Pokemon, the chances are good that you’ve at least heard the name. Created in 1995, Pokemon began as a video game for the humble Nintendo Game Boy handheld called Pokemon Red.

In it, players traverse a mythical land, trying to catch “pocket monsters” of widely varied appearance and ability, then “train” them to defeat other monsters in battle. It’s since spawned a legion of video games, animated television series, trading cards, and other media, becoming the second most successful video game–based franchise in the world. It’s second only to Nintendo’s Mario series.

And this was before July 6, 2016, when the Pokemon Go mobile app was released to the world and quickly rose to dominate, well, seemingly everything. It took five hours to climb to number one on the download charts after its release, over twice as fast as the previous champion.

Here are some things you may find interesting about this instant phenomenon.

10 It May Overtake All Social Networks 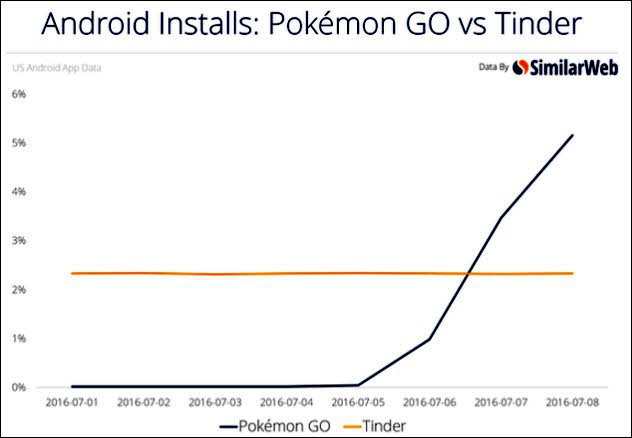 Pokemon Go uses GPS to situate its players on a real-world map, which looks a lot like a rough version of Google Maps. It displays on their mobile device as they traverse the real world, looking for Pokemon to catch. As one might imagine, this requires a good deal of data, and gamers are not simply downloading this game, playing a couple times, and forgetting it. They are using it. Boy, are they ever.

The sheer volume of users has placed a heavy burden on the game’s servers, and the ability to connect to them is rather critical to gameplay. Throughout the first week, connections were spotty for many users. Amazingly, the game has pretty much instantly eclipsed every social network in popularity, which was likely not foreseen by even the most optimistic Nintendo executive.

Pokemon Go was installed on more than twice the number of Android phones in that first week — over 5 percent — than the insanely popular dating app Tinder, with a little more than 2 percent. Also in the first week, the game got within shouting distance of social giant Twitter in terms of daily users. As it continues to roll out new features (like the ability to trade Pokemon with other users, a feature coveted by fans), its popularity is likely to keep exploding for some time.