I’ve been a role-playing gamer for more than 30 years, and I’ve been to more conventions and play days than I care to remember. I’ve seen the best and the worst of the gaming industry. I’ve been there for the highs and the lows. This list is compiled based solely upon my observations, nothing more. If anyone can provide real-world data to disprove what is here, then you’re a bigger geek than me. 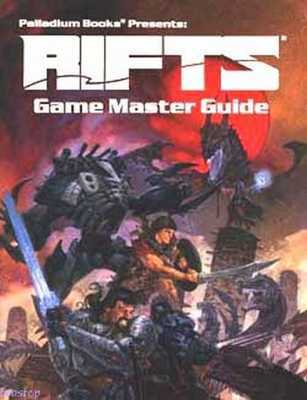 Hundreds of years in the future, the Earth undergoes a dramatic change. Intersections of ley lines (lines of magic energy that crisscross the globe) tear Rifts in space-time, opening a passage to other places, times, and dimensions. Through these portals come dimensional beings or D-Bees. With the appearance of the Rifts also comes magical power, and magic and technology often collide in the world of Rifts. It is not unusual to see an elf armed with an automatic weapon, or a wizard facing an army of robots.

Rifts is a world where anything can happen, and typically does. Japan has become the cyberpunk society that science-fiction has always portrayed it as being. South America suffers a plague of vampires. Atlantis has risen from the waves once more. Europe is again a vast wilderness opposed by an empire of gargoyles. Africa has returned to nature, making it once more a wild and dark continent. China is overrun by demons. In North America, the Coalition States are the primary power. Australia has been flooded by a great inland sea, and with the return of magic, the Aborigines have enjoyed a resurgence. Even the depths of the ocean are no haven in Rifts, as the Lord of the Deep battles the Whale Singers and the New Navy for the fate of the planet.

So with all this great setting and story, why is Rifts #10 on the list? Simply put, it’s all in the mechanics. Most people will be quick to tell you that while Rifts is a great setting with wonderful backstory and the potential for years of play, the mechanics quickly kill the enjoyment. Each supplement that is released features more powerful options than the previous one, and many of the more attractive role-playing options are left behind by the ever-present advance. Coupled with the fact that the rules are inconsistent even within their own setting, the whole can make it difficult to enjoy. Imagine playing a modern-day human with no magical powers or supernatural abilities while your buddy plays a dragon. That’s the kind of disparity that is seen in Rifts games.